The “First New England School” developed during the American Revolution. It consisted largely of self-taught hymn composers like William Billings. Their rustic styles ignored the stringent rules of European music theory. The Second New England School, by comparison, grew directly out of academia. By the end of the 19th-century, universities in the United States were emulating their European counterparts. Every male composer of the New England group traveled overseas to study with German composers and theorists. Chadwick and Parker both passed on these methods to their students, including Florence Price and Charles Ives. As the sole woman of the group, Beach did not travel to Europe to study; she instead taught herself composition by studying German compositions.

The Boston Symphony and The Second New England School 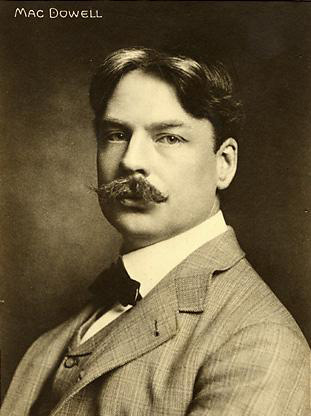 The formation of the Boston Symphony Orchestra in 1881 led not only to exposure to the latest European masterworks but to performances of their own compositions. Paine and Foote initially led the group in performances, but by the turn of the century, MacDowell was the most prominent member. He became especially well known for his Second Piano Concerto and “To a Wild Rose” from his Woodland Sketches for piano. In 1907, facing declining health, he established the MacDowell Colony, a retreat for artists of all disciplines. One regular was Amy Beach.

The Career of Amy Beach

Beach composed many chamber works, such as a Violin Sonata in A minor. She was also prolific composer of art songs, the most socially acceptable genre for women composers in the Victorian Era. Large, highly formalized works like symphonies and concertos were considered to be beyond their abilities and temperament. Despite these societal limitations, Beach successfully premiered her Gaelic Symphony (1896) and Piano Concerto (1900) with the Boston Symphony. Though some critics opined that as a woman, she was unsuited for such works, others praised her compositions. Chadwick and Parker had attended the premiere of the symphony, and the former later wrote to Beach, saying “…I always feel a thrill of pride myself whenever I hear a fine work by any of us, and as such you will have to be counted in, whether you will or not—one of the boys.” Beach also notably premiered some works, including her violin Romance, at the 1893 Chicago World’s Fair as part of the Women’s Musical Congress. As the first major American woman composer, she has become the most frequently performed composer of the group since feminist movements in music came to prominence in the 1970s.

Visit us in-store or online to find works in our collection by Edward MacDowell and Amy Beach.

Want exclusive offers delivered directly to your inbox? Subscribe to our newsletter!

Overuse Injuries: Everything You Never Knew

In celebration of Independence Day, our retail store and administrative offices will be closed today. https://t.co/JuDvClRNMY

We are proud to be celebrating LGBTQIA+ composers and musicians during Pride Month 2022. #PrideMonth #ClassicalPride https://t.co/mzmea5pZLR

"For generations and years, our communities have been healed by music. Music is a medicine for many, many cultures… https://t.co/wObqodj4sG

Our friends at JazzWire Summer Summit are prepared to welcome adult string bass players for both virtual and in-per… https://t.co/13fRxXDw0E