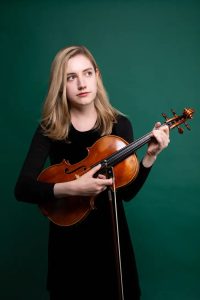 If you’re a fan of “The Tonight Show Starring Jimmy Fallon,” you may have caught the debut comedy set of Isabel Hagen. Hagen is quickly making a name for herself as a stand-up comedian, but she has actually participated in several TV appearances and critically acclaimed Broadway shows as a different type of performer: a violist.

Isabel Hagen graduated with a master’s from Juilliard and has numerous accolades as a touring musician. But at the age of 29, shortly before the onset of the COVID-19 pandemic, Hagen decided to take the plunge into comedy. Though she is not exactly a musical comedian like Jack Benny, Victor Borge, or the more modern Bo Burnham, Hagen has mentioned a desire to do more stand-up performances with viola accompanying her set. Find out how this prodigious music student has taken the world of comedy by storm.

Her skills are no laughing matter

Hagen was a classically trained student at Juilliard who spent several years touring internationally with various ensembles. She has credits as a pit musician on Broadway shows like “The Lion King” and “Les Miserables,” and her talent as a professional violist knows no bounds. But Hagen discovered a different passion during her time at Julliard — going to open mics to watch stand-up comedy.

Eventually, Hagen decided she wanted a taste of the spotlight and began to put together comedic routines, getting a feel for what worked and what didn’t. After thousands of open mics and plenty of bombed shows, Hagen has begun to settle into her new role as a comedian. She describes wanting to make sure she was funny enough on her own before going on to incorporate her instrument into the act. She spent four years learning the art of comedy before bringing the worlds of viola and humor together in her Salastina’s Happy Hour appearance.

If you are interested in exploring the music, comedy, or musical comedy of Isabel Hagen, check out her website. YouTube is also a great resource. Hagen has numerous videos showcasing her various talents, collaborating with other musicians and comedians, and telling jokes about violas that will have your sides splitting. Interested in making the leap from musician to comedian yourself? You may also benefit from Hagen’s interviews and writing on the subject of how she broke out into comedy.


What’s Wrong With My Violin?

The Benefits of Microfiber Cleaning Cloths for Instruments

"Arrr, matey! This is great day to rent a cello from Johnson String Instrument!" https://t.co/Xx8ZLpsTNT… https://t.co/4sg03JG7uJ

Looking to help someone start a stringed instrument? Rent the best instrument with our Right Start Rental program!… https://t.co/ZwnraOM7KY