It’s back-to-school time!   Whether students are in the building or learning remotely this school year, teachers are working hard to make sure their students are getting the best education they can offer.  This blog post celebrates some of the most famous pedagogues in the string instrument world throughout history and their influence on today’s music students.

As a teacher, he was one of the founding violin professors at the Conservatoire de Paris, and taught there from 1795-1826.  A famous pedagogue that co-wrote the violin curriculum for the conservatory, he is considered one of the founders of the French violin school.  His method book, the 42 Studies or Caprices (ca. 1796) is still a popular method book used by many violin students. It has been transcribed for viola and cello.

Fuchs was born in New York City on November 18, 1901 to a musical family – her brothers Joseph and Harry played the violin and cello.  Her music education began by studying violin with her father and later with Franz Kneisel at the Institute of Musical Art (now the Julliard School).  Fuchs began her career on violin in 1926, but quickly shifted to viola.  She became a highly respected string player, performing with chamber groups and as soloist with major orchestras like the New York Philharmonic,  and passed away on October 5, 1995.

Fuchs also had an exceptional career teaching at some of the most renowned music schools around the country, including the Manhattan School of Music and Julliard.  Among her most notable students is Isaac Stern.  During her teaching career, she composed two method books for viola:  16 Fantasy Études and 15 Characteristic Studies.

Popper was born in Prague, Bohemia on June 16, 1843.  He studied under cellist Julius Goltermann (1825-1876) at the Prague Conservatory.  Conductor and pianist Hans von Bülow recommended Popper to become Chamber Virtuoso for the court of Prince Constantin (1801-1869). He composed works for cello, including four concertos, a Requiem for three cellos and orchestra, and a number of pieces for cello and piano.  He passed away on August 7, 1913 near Vienna.

At the Conservatory at Budapest, he taught many cellists who would go on to have successful careers, including Adolf Schiffer, who was János Starker teacher.  In addition to his compositions, Popper wrote a collection of études called High School of Cello Playing.

As a pedagogue, Simandl was extraordinarily influential in double bass studies.  He wrote his method book, New Method for the Double Bass, during his tenure at the Vienna Conservatory.  Simandl said the purpose of the book was to provide the first complete double bass method that is not only thorough, but also easily accessible[1].

Special thanks to Yoonhee Lee, John Guarino, Phil Rush, and Robert Mayes of Carriage House Violins for their assistance.

Want exclusive offers delivered directly to your inbox? Subscribe to our newsletter!

Our annual Holiday Sale is back, and so is our Holiday Gift Guide! This year, we have a mix of exciting new products as well as old favorites for musicians of all levels and ages.

Our brand for electrics, this instrument is a great option for those getting started with electric violin. An outfit comes with the instrument in one of five colors, bow, case and headphones.

Winner of Best in Show at the 2016 NAMM conference! This innovative instrument can be purchased with four or five strings in two different colors. The outfit includes the instrument, bow, case, cable and rosin.

We haven’t forgotten about you viola, cello and bass players! See all of our electric instruments currently on sale on our website.

A newer, lighter case makes a great gift! This JSI exclusive, both durable and light, is a great option. Available for violin, viola and cello in nine different colors! 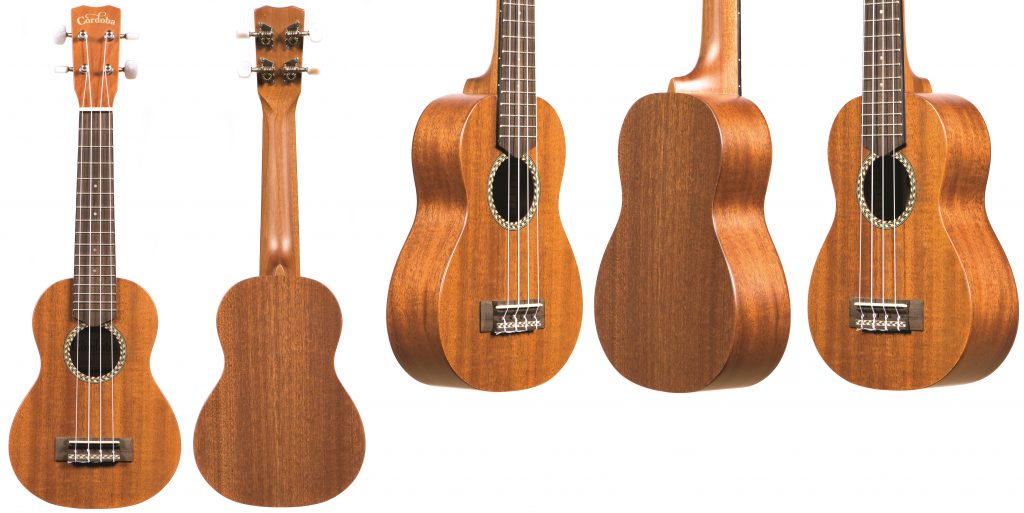 Check out why the ukulele is such a great instrument in our blog post and give someone the gift of this versatile instrument this holiday season. There are four types to choose from: soprano, concert, baritone and tenor. May we also suggest this book to help them get started?

These books are great holiday gifts for young musicians! Some of our favorites are:

Berlioz the Bear, written and illustrated by Jan Brett, $6.99

“Berlioz and his orchestra are scheduled to perform at a gala ball in the village square. But just before showtime, their bandwagon becomes stuck in the road. Whatever will they do?” 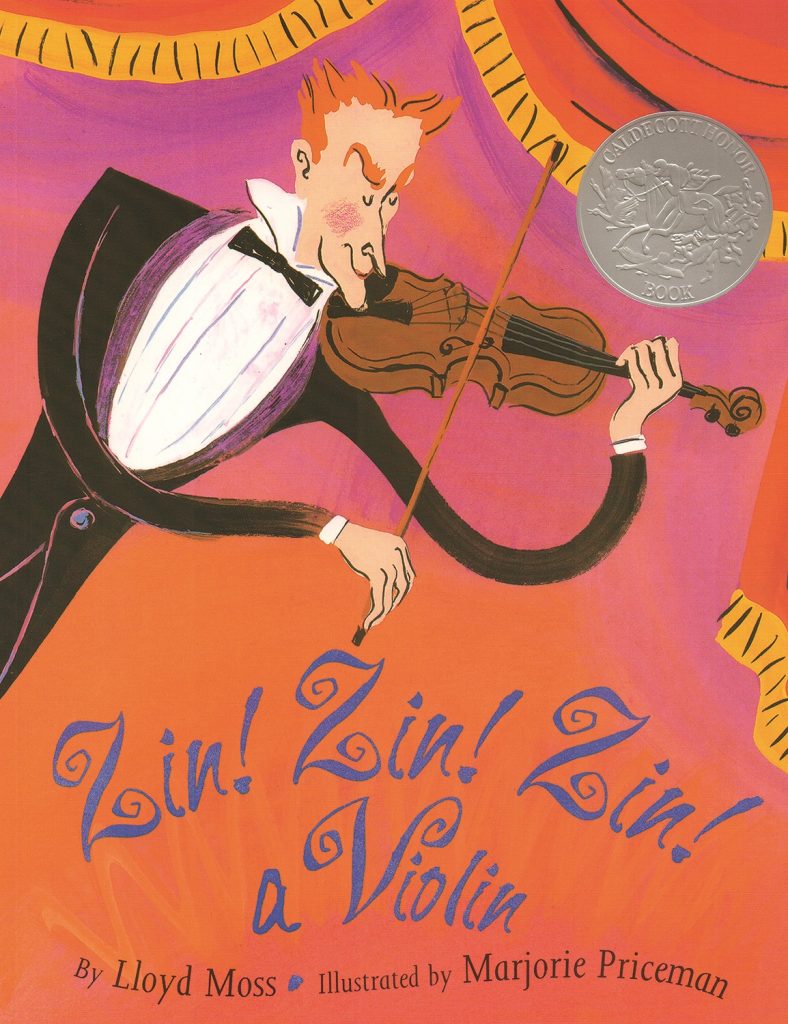 A Caldecott Honor book, this classic is a great introduction to the orchestra. Intended for ages 4-8.

The Philharmonic Gets Dressed 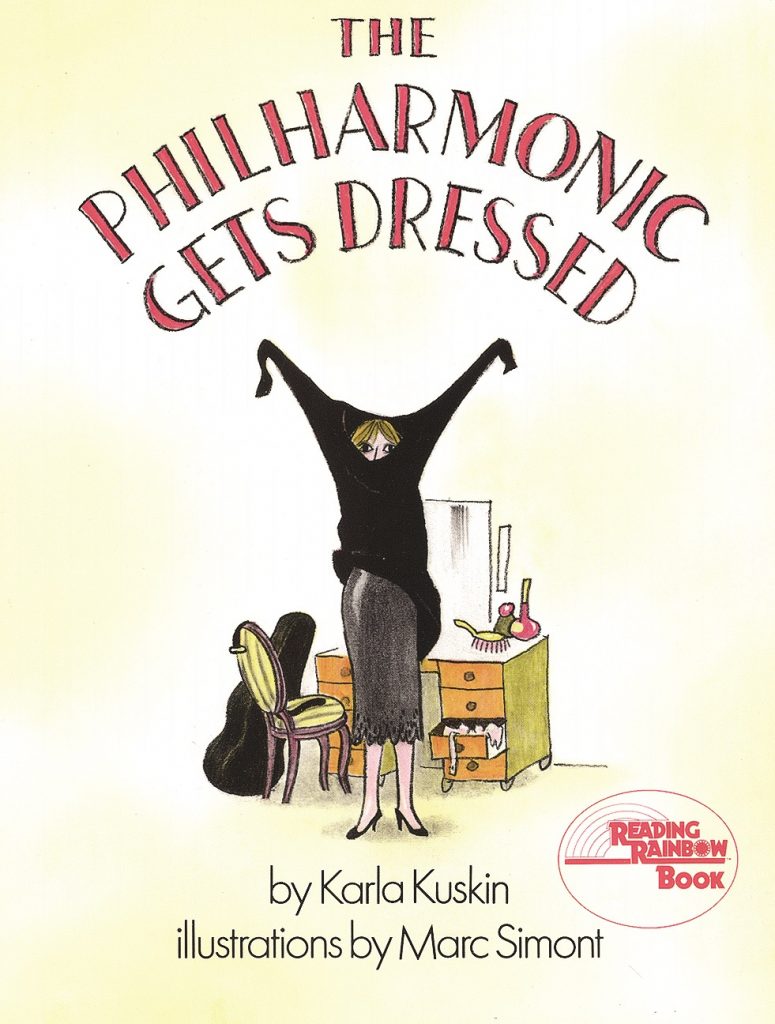 The Philharmonic Gets Dressed by Karla Kuskin, Illustrated by Marc Simont, $6.99

“It is Friday evening. The sky is getting darker and darker. Here and there, all around the city, one hundred and five people are getting ready to go to work. Some of them take showers, others bathe. Some shave or trim their mustaches, others put on dusting powder and a little jewelry. Then they all get into special black and white clothes and travel to midtown with their instruments. There, at 8:30, they will work together–playing beautiful music in an orchestra.” Intended for ages 4-8.

Not only is this rosin available with a Bach manuscript, it’s also available in GLOW-IN-THE-DARK! 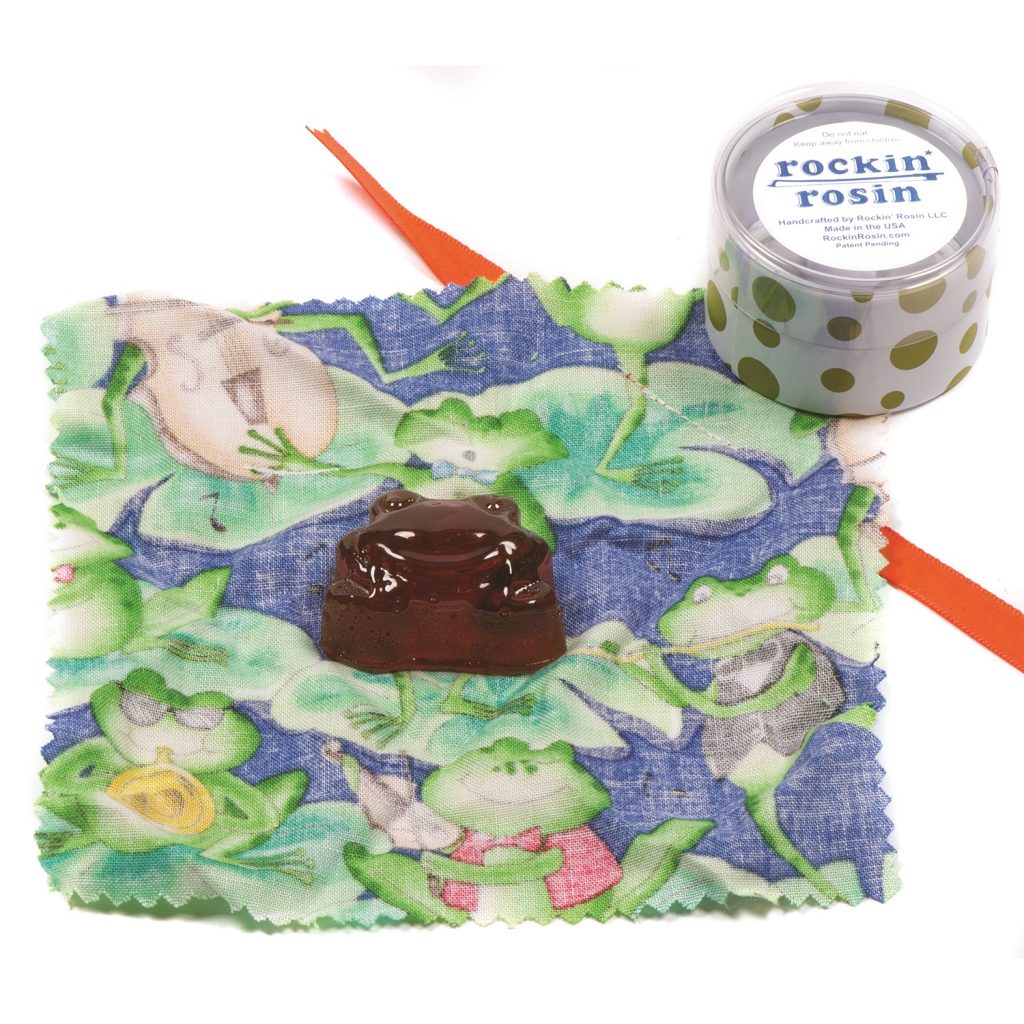 This fun rosin is available in six different shapes including frog, snowman and even pizza! 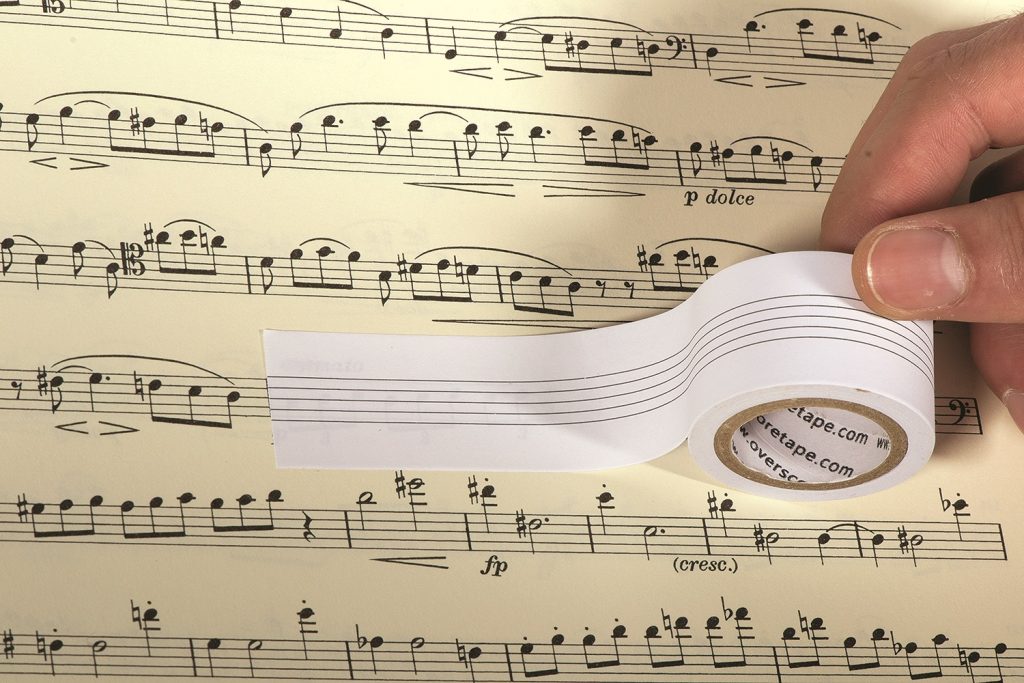 The tool you never knew you needed: REMOVABLE manuscript tape!

You can find even more stocking-stuffer ideas here.

Don’t forget to sign up for our newsletter to get our exclusive December Deals December 12-18th and for even more savings.

Happy Holidays from all of us at Johnson String!

Back to School: First-Time Players

It’s that time of year again!

Is your child starting an instrument this school year? Not sure what they need? Whether they are taking lessons through their school or elsewhere, their teacher will have a list of what they require for their students. However, we can also give you a basic list of what your child will need to succeed:

Where are you getting your instrument? For a child just starting lessons, many families choose to rent. This is a great way to have access to a high-quality instrument without the financial commitment of purchasing one. All of our rental outfits come with an instrument, bow, case, and rosin. They also come with insurance, which includes things like broken strings, accidental damage, and size exchanges. Check out the video below to learn more about our well-respected rental program:

Not interested in renting? Buying is also a great option! When shopping, make sure that the shop you buy your instrument at has a trade-in program. Keep in mind that most children are not going to start out in a full size instrument; they will need something smaller and will change sizes as they grow. Our sales department at Carriage House Violins has a trade-up program that allows you to trade any instrument or bow purchased with us for another of equal or greater value. Keep in mind that if you buy an instrument, you will be responsible for the cost of repairs and strings.

**A note about instrument shopping and rentals: Always work with a reputable shop. You may notice lower prices on sites like Amazon or eBay. To learn an instrument, you need something that is high enough quality that it works with your child, not against them. Quality can’t be guaranteed on sites like these, but it can at shops like Johnson String Instrument whether you choose rent or buy.

Almost all programs require a beginning method book. Your child’s teacher will tell you which one they use. Make sure to pay attention to the edition they ask for; a lot of publishers make significant changes between editions and group classes all use the same book. You can find our full selection of method books here.

No matter which instrument your child chooses, you’ll need something to help stabilize it. For violin and viola, this is a shoulder rest. For cello and bass, it’s an endpin rest. Both help the player hold the instrument and promote good technique. Talk to your child’s teacher about their preference.

Some teachers list music stands as optional, but they are important. Like a podium for a public speaker, it puts the music at a comfortable level and angle. You don’t need anything fancy – our JSI folding stand will do the trick! It comes in a wide variety of colors and is easily carried and stored. We also carry other models and non-folding stands here.

These things required but highly recommended for players of any age:

Don’t forget: Your child’s teacher is your greatest resource! They will tell you exactly what they want their students to have. If your child is taking lessons locally, many school districts and teachers have arrangements with us to have a rental night where you can pick up all of these supplies at school in your area.

We hope everyone has a great start to the school year!

What is Instrument Insurance?

Instrument insurance is an important part of caring for your instrument. Professionals use it regardless of their genre and music shops have it to protect their inventory. Whether you recently bought an instrument or own one that isn’t already insured, we highly recommend purchasing a policy to help protect your investment.

It’s exactly what it sounds like: an insurance policy with specific coverage for your instrument(s). It usually takes the form of either:

Any insurance policy is about financial protection should damage or theft occur in the future and instrument insurance is no different. It is designed to protect you against things like theft, accidental damage, and devaluation. Always check with the insurance provider about specific coverage questions, but most companies will cover common problems that can happen with musical instruments.

Rider: This something you can add to a preexisting renter’s or homeowner’s insurance policy. This is a great option if you are not a professional musician but still want protection for your instrument. Be sure to ask about the kind of coverage a rider has with your current insurance company before adding anything.

Separate Policy: If you use your instrument professionally, this is what you will need. The main companies used by most musicians and shops in no particular order are:

The benefit of these companies is that they understand the specific nuances of musical instruments and their value. It’s also a good option if you have multiple instruments, a lot of equipment, or travel frequently.

You will need a couple of things before you start looking:

Once you have this information, start shopping! Talk to the companies you are considering about any concerns and ask what they specifically cover in their policies. Make sure to compare deductibles as well as rates. For example, if you have a $1,500 instrument and the deductible is $1,000, that policy may not be your best option. Get quotes from everyone you are thinking of using, decide what will work best for you, and enjoy the piece of mind that comes with knowing your instruments are protected.

Happy July 4th from all of us at Johnson String Instrument! Have a safe and exciting day! https://t.co/EGJyYln0QO

Happy July 4th Weekend! In honor of the holiday, we are offering free standard shipping! Use promo code REDWHITEBLU… https://t.co/xBr3sHQJBi

Today is the last day of the Graduation Sale! Check it out before it ends! https://t.co/MYqM9AsYga https://t.co/82yzjp3fzh